The International Order of the Moustache Guys is a secret society of shady men with even shadier facial hair. Believing her husband is their latest member, Ali dons a fake moustache and goes undercover to infiltrate enemy lines. Dealing with characters from Evil Twin Brother and Teen Father to Tom Selleck and Kentucky Prosecutor, there seems to be no end in sight for Ali when it comes to wacky, ridiculous moustachioed creatures in this rapid, laugh-out-loud comedy. 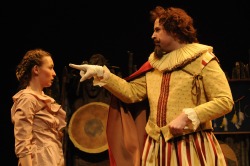 Butter churns, hardtack and...musical numbers? This hilarious inside look at the high-stakes, hardcore world of historical re-enactors pits accuracy against exuberance against interoffice politics in the Lost Colony of Roanoke.

In Paris You Will Find Many Baguettes But Only One True Love
1M, 2F. 10 minutes
(Winner of the Heideman Award. InspiraTO Festival Winner, Toronto)
Rights/Script available from Playscripts 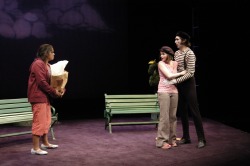 Liz is looking for true love and Lindy is looking to fix her broken heart, so they head, of course, to Paris. When Liz finds the man of her dreams, Lindy faces a dilemma: can she just let her friend be happy? Advisory: This play contains a mime. 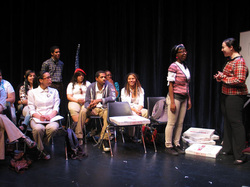 A high school civics class turns uncivil when substitute teacher Mr. Nash trains the kids to participate in Virtual Congress, a mockup of the U.S. Senate.  When the kids' cliques and petty in-fighting turn into fillibusters and useless procedures that grind the class to a halt, Virtual Congress starts looking not so virtual. 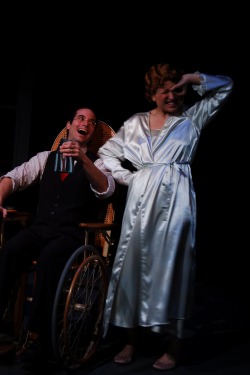 This highly accurate historical short takes a look at Eleanor Roosevelt and FDR back before they were in the White House. Back when they were in a polio clinic in Georgia. Drunk.

Magician Ben Vs. the Wizard  Merlin
3M, 3F. 10 minutes
Available from Smith and Kraus via Amazon 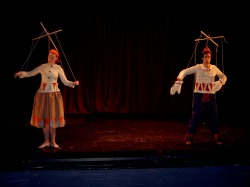 Tilly and Bill are human marionettes. Tilly has strings on her arms and her wrists, and she can play piano but she can’t dance. Bill has strings on his arms and his legs, and he can dance but can’t play piano. Will the two make beautiful music together, or end up a tangled pile of wood and old strings?

Frank Sinatra invents the lyrics to The Lady’s a Tramp. And kneecaps anybody who gets in his way.

Vincent and Abby do not see eye to eye. Abby wants Vincent to take off his Hawaiian shirt. Vincent does not. Say “Aloha” to conflict!

Four dudes want to get chicks but they can’t afford to buy instruments and start up a band. What the hell should they do? How about doing it barbershop style and starting a bitchin’ garage quartet?

Mom and Dad leave the house to their children Will, Nate, and Mary. Nate and Mary can’t wait to get rid of the place but their kid brother Will doesn’t want to move out. Will gives them a challenge: he’ll give up his stake in the house if they beat him in one game of chess.

Lisa is a lady of a certain age and Trip is her kept boyfriend. Trip’s got dreams of becoming a rock star and Lisa’s got nightmares of growing crow’s feet. Trip’s got a sharp tongue and he knows how to use it, but Lisa’s not afraid to break a boy’s heart lest he forget who’s holding the purse strings.

To the North Country! Where the mines are as deep as the women are tall! Where a deer in the headlights means a good country breakfast. Join Marguerite as she steps off the train from the South Country, intent on finding out more about the place up North that her father called home. But first she’ll have to get the attention of the four tough broads sipping caribou piss in the corner.

Young Flex just scored an internship at Hot 97, and if he wants to get a job as a DJ he’ll have to finish a Herculean task: counting up the number of times Ludacris says “Roll Out” on the song Roll Out. Fortunately, he’s got the help of Bootsy Nostradamus: that soul seventies seer with the flava in ya ear that’s been a DJ at Hot 97 for a thousand long years.

Set to a soundtrack of Queen’s I Got to Break Free, this ridiculous tale takes Pirate Tom and his pet parrot through the triumphs and humiliations of the dating scene. But don’t you worry for Tom. Old Pirate Tom’s got a trick or two up his sleeve. And a metal hook up the other sleeve.

Ellie and Addie have a problem. Their Mommy abandoned them and their Daddy hanged himself in the attic.  So they do what any reasonable orphans would do: smoke Daddy’s cigarettes and eat all his Twizzlers. That is until the arrival of Officer Gabbo, a truant officer slash clown.